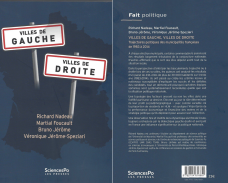 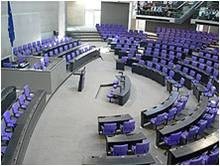 Two voting models predict that Angela Merkel will continue to be the German Chancellor following the upcoming national election, but the models differ in their vote forecasts. The Political Economy Model (Jérôme, Jérôme-Speziari and Lewis-Beck), which offers vote forecasts for each German party, predicts that her coalition (CDU/CSU-FDP) will lead with 47% of the vote but will be a few seats short of a majority. The Chancellor Model (Norpoth and Gschwend), on the other hand, forecasts that the governing coalition will win 51.7% of the vote.   Chancellor Angela Merkel enjoys a high approval rating, which puts her at a 2-1 advantage over the challenger, Peer Steinbrück. Chancellor support has proved to be a strong predictor of vote choice in German elections.   The forecast model also includes party support in previous elections, and length of tenure. The different vote forecasts for the governing coalition notwithstanding, the Red-Green alternative has almost no chance of getting a majority of seats. But whether the governing coalition will be able to stay in office or be replaced by a Grand Coalition may depend on the success of the FDP to surpass 5% of the vote, the minimum to obtain seats. The Political Economy Model predicts a vote of 6% for the FDP. 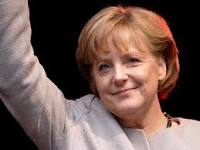 A POLITICAL-ECONOMY FORECAST FOR THE 2013 GERMAN ELECTIONS:

WHO TO RULE WITH ANGELA MERKEL?

Our political economy model has correctly forecasted the 1998 and 2005 elections. However, in 2002 we forecasted a tight race to the benefit of the CDU/CSU-FDP opposition, so underestimating the narrow defeat of the FDP by the Greens. In the German political system, proportional representation makes single party domination almost impossible. On the contrary, the big parties, SPD or CDU/CSU, are pushed to build a majority coalition. In this competition, the FDP has been the “hinge party” in German political life, at least until 2002. But, since then, the Greens have been able to challenge the FDP, with the Ecologists allowing the SPD to form a red/green coalition in 1998 and in 2002. Similarly, in 2005 the FDP was not associated with the grand coalition driven by Angela Merkel.

The FDP was finally returned to power in 2009. Still, paradoxically, frequent confrontational participation with the CDU tended to seriously weaken its political power. One might even wonder whether it will be able to obtain 5% of the votes cast in September 2013. Therefore, given the uncertainty over the FDP, the rise of the Greens, and the pressure from the Linke-Pds party, we decided to build a new voting model more up to forecasting the electoral weight of the hinge parties and to inferring the future coalitions.

The most appropriate method appears to be a SUR (Seemingly Unrelated Regression) model simultaneously explaining the vote for the CDU/CSU, the SPD, the FDP, and the Greens and the Linke-PDS. In this model, we keep the logic of incumbency for the main coalition party. Therefore, from 1961 to 2009 the INC-MAIN variable includes the vote for the party of the CDU or SPD Chancellor. The OPP-MAIN variable contains the vote for the party in favor of the main opponent of the outgoing Chancellor. Thereafter, specific vote functions for the FDP, the Greens (GRUNE), the Linke-PDS (LINKPDS), and the other parties (OTHER) will be added.

The modeling of the Chancellor party and the opponent party obeys the government responsibility standard. The incumbent vote should be depressed by the prior unemployment level (UQ-2 andU*Q-2 measured two quarters before the election[1]), while the vote for the main opponent should be boosted. Similarly, the bigger the preference[2] of the voters for the Chancellor (KANZQ-1INC) or the opponent (KANZQ-1OPP), the bigger the electoral premium. Further, in line with the localization of economic responsibility (Powell and Whitten, 1993), the small parties should be less held responsible for the economic situation compared to the large ones. Therefore, the vote for the FDP should primarily reflect the voters’ wish to have it in a future coalition. Such a variable has been measured by German opinion polls for fifty years, and since 1998 and the rise of the Greens it is even more accurate. In this regard, we have distinguished between situations where the FDP was an outgoing party with the CDU (COINCFDP/CDU), or with the SPD (COINCFDP/SPD), or an opponent with the CDU (COOPPFDP/CDU).

Voting for the Greens is assumed to be primarily based upon their electoral potential, (PGRUNE) in the polls (IFD Allensbach), distinguishing whether they are opponents or incumbents. Regarding the Linke-PDS, we selected the voting intentions in the polls (PLINKEPDS, IFD Allensbach) and a dummy variable coding the period before and after the Oskar Lafontaine takeover in 2005 (LAFONTAINE). Finally, the vote for the other parties is mainly explained by the vote intentions in the polls for the residual parties (POTHERS, IFD Allensbach). Indeed, several times in German history, small residual parties approached scores between 2% and 5% thereby reducing the scores of the big parties[3]. In this regard, the new anti-Euro German party (AFD) could play such a role in 2013.

It is worth noting that in the specification of the equations we have taken into account several political-institutional events (from the period 1961-2009) that affect the German elections. Therefore the grand coalition CDU/SPD (GCOAL2009) has had a negative impact on the CDU and even more on the SPD, but it has had a positive effect on the FDP and on the residual pivotal parties (OTHERS). Similarly, the first elections following German unification (REUNIF) in 1990 broke the Greens electoral progress, which has stayed constant until now. Finally, the DUM6180 variable in equation 2, scored 1 from 1961 to 1980 (zero otherwise) underlines the break in the alliance strategy of the FDP, which definitively becomes a key ally for the CDU on the right, breaking with the SPD in 1983 (DUM83).

After identifying these specifications for each of the vote equations, separately tested, we estimated the following SUR model. Then, from the estimated coefficients, we propose a forecast for vote shares and party seats for 2013.

The SUR model reads as follows[4]:

Then, we have plugged in the following values, in order to make the vote forecast for the parties[5]:

If the elections were held now (in April 2013), Angela Merkel would be assured of remaining the Chancellor, with the SPD and the Greens reaching no higher than 38% of the vote share[6]. (See Table 2).

However, the transfer from the vote share into seats via the swing ratio makes clear that a CDU/CSU-FDP coalition will fail short, by eight seats, of securing the absolute majority (based on the 2009 seats share).

This is a fragile result, because taking into account the margin error of the FDP vote function (+/- 1.24), it is not certain that the Liberal-Democrats will have elected any candidates. Could the German Chancellor build a “Jamaican coalition,” or a black-green coalition, just as in the Land of Hamburg? This is unlikely at the national level, because the Chancellor would have to agree to dramatic concessions regarding the governance of Europe. Assuming that the pure political parameters stay constant until September 2013, our model shows that a further deterioration in the unemployment rate could require Angela Merkel to again build a Grand coalition with the SPD. The direct effect would likely be a weakening of the camp favoring budgetary discipline inside the EU.

Zellner, A. 1962. “An efficient method of estimating seemingly unrelated regression equations and tests for aggregation bias”.Journal of the American Statistical Association 57: 348–368

[1] In the equation OPPMAIN , U Q-2 is scored zero from 1961 to 1972 when the unemployment rate is below one point. We assume that such a low level cannot favor the opponent.

[2] A quarter before the election date.

[6] The raw results of the forecast give a total amount of vote share for the political parties slightly above 100. The table 2 results have been normalized. 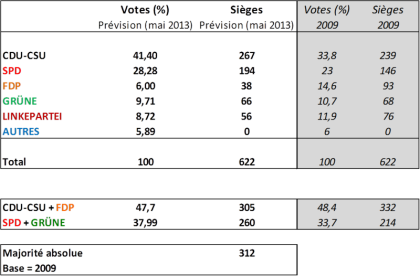 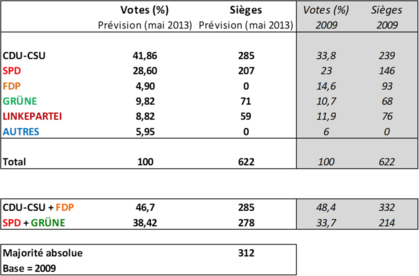 In the past forty years an extensive literature has grown up around aggregate political economy models of elections, but few have papers focused on the German case. Initially, Kirchgässner (1977; 1991), developed Vote-Popularity (VP) functions, with the unemployment rate as the dominant economic variable predicting the German ruling parties’ performance. Thereafter, using vote functions (VF) for the period 1961-1994, Jérôme, Jérôme-Speziari and Lewis-Beck (2001), tested the “yardstick” competition existing between French and German economic votes.

Using these VP Functions to predict German studies has seldom been done. Jérôme, Jérôme-Speziari and Lewis-Beck (1998) initially developed a vote function where the rate of unemployment and the popularity of the FDP are the main predictors. This first model correctly forecasted the CDU/CSU-FDP defeat. Using this same model, experiments were run in the forecasting of three subsequent German elections (Jérôme, Jérôme-Speziari and Lewis-Beck, 2002, 2005 and 2009, see Pollyvote website). At about the same time, Norpoth and Gschwend (2000, 2003) built a forecasting model where the desire for one of the main party’s to provide the Chancellor predicts the election result. This model is known as the “Chancellor model” (Norpoth and Gschwend, 2010).

The various vote functions used for these forecasts are based on the two basic pillars of an accountable democratic government (Key, 1966), i.e., political and economic performance. As regards the voter time horizon, the model of Jérôme, Jérôme-Speziari and Lewis-Beck is rather retrospective, since their unemployment variable is measured two quarters before an election. Norpoth and Gschwend’s Chancellor model is mainly prospective since it is based on surveys openly asking “With a view to the next elections, which candidate between Mr. (Mrs) X and Mrs (Mr)Y would you prefer to be your Chancellor?” Nevertheless, whatever their assumptions, both models forecasted well in the 2009 German legislative elections, including the building of a CDU/CSU-FDP coalition led by A. Merkel. In this issue the two models are ran again to provide a forecast for the next 2013 German elections. From its part the political economy model is renovated adopting a SUR (seemingly unrelated regression) method.

Kirchgässner G. 1991. “Economic conditions and the popularity of the West Germany parties, before and after the 1982 government change”, in Economic and politics, the calculus of support, Ann Arbor, University of Michigan Press , p. 103-122.